The Seekers are a automated bipedal-peacekeeping force co-developed by Mitra, Garrison, and Nanscent Robotics. Originally meant to be the ultimate combat unit, they could be outfitted with various Holographic Defense Modules (HDMs). Conflicts requiring these extreme measures dropped in frequency which lead to the removal of most Seeker equipment. Just prior to the fall of Eden, Seekers were being deployed alongside of Garrison Enforcers as a vestigial, ceremonial entity.

As separate entities, Seekers are not especially intelligent and instead rely on very limited protocols. When connected to the Security Network, via a complex network and working in tandem with Observers, many Seekers can share knowledge and information through a very limited bandwidth, giving a resemblance of a higher intellect. Their shared intelligence permits them to operate autonomously from the normal Garrison command. From time to time, certain Seeker entities, referred to as Dark Seekers by rumours who only appear at night during new moons though dismissed as fanciful speculation, that have gained too much awareness from this connection must be purged.

The Seekers have three observed behaviour-stages. The first stage is when Seekers patrol Eden for unwarranted actions, such as hacking. In this docile state they will often conduct a bio-metric scan of the surrounding environment and citizens of Eden 052; emitting a blue constant light until the scan is completed. The second stage is when Seekers have detected the source of the suspicious behaviour, such as the hacker. In this state they will emit a constant yellow light while searching for what triggered its security protocols. If the source of the suspicious behaviour is not located they will return to a docile state and continue patrolling but if the perpetrator is detected the Seeker will attempt to arrest the perpetrator and have them delivered to the detention area of Eden 52. The third stage is when a perpetrator evades arrest. In this state they will emit a constant red light while attempting to incapacitate the perpetrator using physical harm, for reasons unknown the Seeker will kill the individual resisting rather than incapacitate them.

A Seeker known as Twelve, assumingly a Dark Seeker, had been lost during routine repair work while maintaining the surveillance grid. PAMELA found the unit and partitioned space within the servers for him. [[Pamela}} and the sentient Seeker continued communicating until it was discovered.

Generally, their simple melee attacks can be dodged however they are capable of swinging around rapidly with a devastating hit. Since they are entirely melee-based a long-range weapon is recommended or a debilitating PAMELA ability or melee-weapons with a stun effect. 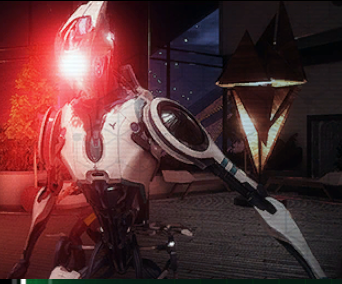